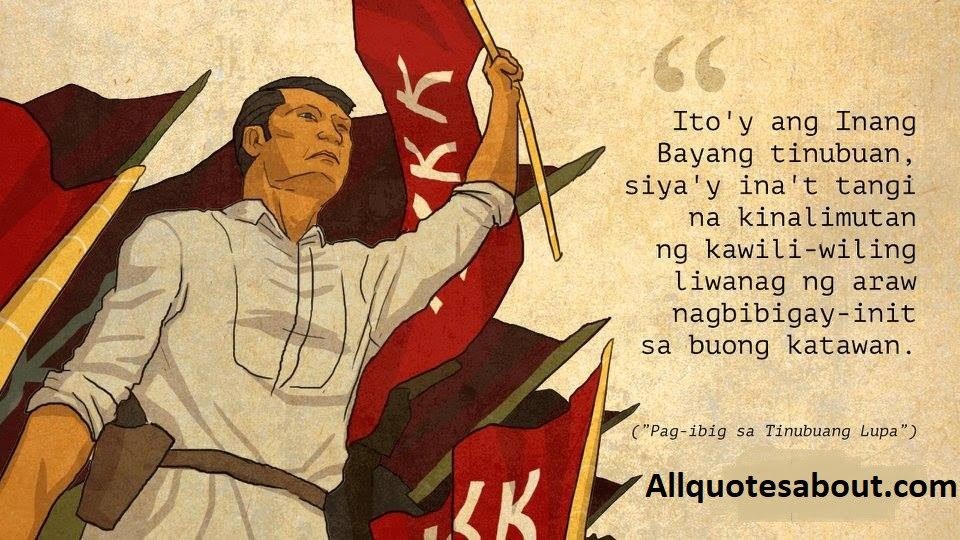 Andres Bonifacio Quotes: Andres Bonifacio was born on November 30, 1863, in Tondo, Manila. He is the Leader of the Philippine Revolution. His father Santiago was a tailor, a local politician, and a boatman who operated a river-ferry; his mother, Catalina de Castro, was employed in a cigarette-rolling factory. Andres Bonifacio simmered with rage and humiliation. The movement that he had created to oppose Spanish colonial rule in the Philippines had just voted (likely in a rigged election) to make his rival Emilio Aguinaldo president in his stead. Bonifacio was given the lowly consolation prize of an appointment as Secretary of the Interior in the revolutionary government.

Love your Country next to God, your honor, and most of all yourself. Andrés Bonifacio

What love can be purer and greater than the love of the country? What love? No other love, none.Andrés Bonifacio

Reason teaches us that we must be united in will, united in thought and that we might have the strength to search out the reigning evil in our Nation. This is the time for the light of truth to the surface; this is the time for us to show that we have our own sentiments, have honor, have shame, and have solidarity.Andrés Bonifacio

Reading gives us the furniture of our minds. Reading can spell the difference between independence and slavery; liberation and isolation. Without reading, our history would have turned out differently. Reading made and shaped our heroes.Andrés Bonifacio

Reason teaches us that we cannot expect anything but more suffering, more treachery, more insults, and more slavery. Reason teaches us not to waste time hoping for the promised prosperity that will never come and never materialise… Reason teaches us to be united in will, united in thought, and united in purpose and that we might have the strength to combat the prevailing evil in our Nation.Andrés Bonifacio

Why? Which is a perfect size,
which offered an irreverent inspiration,
is very costly ruling,
and ginugulan harbor life?Andrés Bonifacio

Ay! It’s her homeland:
He iona’t distinguishing inertia
of interesting brightness of the sun
that gives heat throughout the body.Andrés Bonifacio

Also with this love of country,
all the more expensive gunita’y,
From masaya’y gasong infancy
until his body be in the grave.Andrés Bonifacio

How unfortunate to be in town!
Memoirs yet always filled with sorrow,
no anxious expectation expecting
But makita’y homeland.

If this country is in danger from wicked
and he needs defending,
the child, spouse, parent, brother;
A call was tatalidang strained.Andrés Bonifacio

Forward, then, boldly got nagabuhay
Hoping absolute convenience
and nothing but bitterness,
Hayo since raised the naabang town!Andrés Bonifacio

Who is Andres Bonifacio?

Andrés Bonifacio y de Castro was a Filipino revolutionary leader and the president of the Tagalog Republic. He is often called “The Father of the Philippine Revolution.

Why did Andres Bonifacio died?

What is Andrés Bonifacio Bio ?

New Quotes: All Quotes About